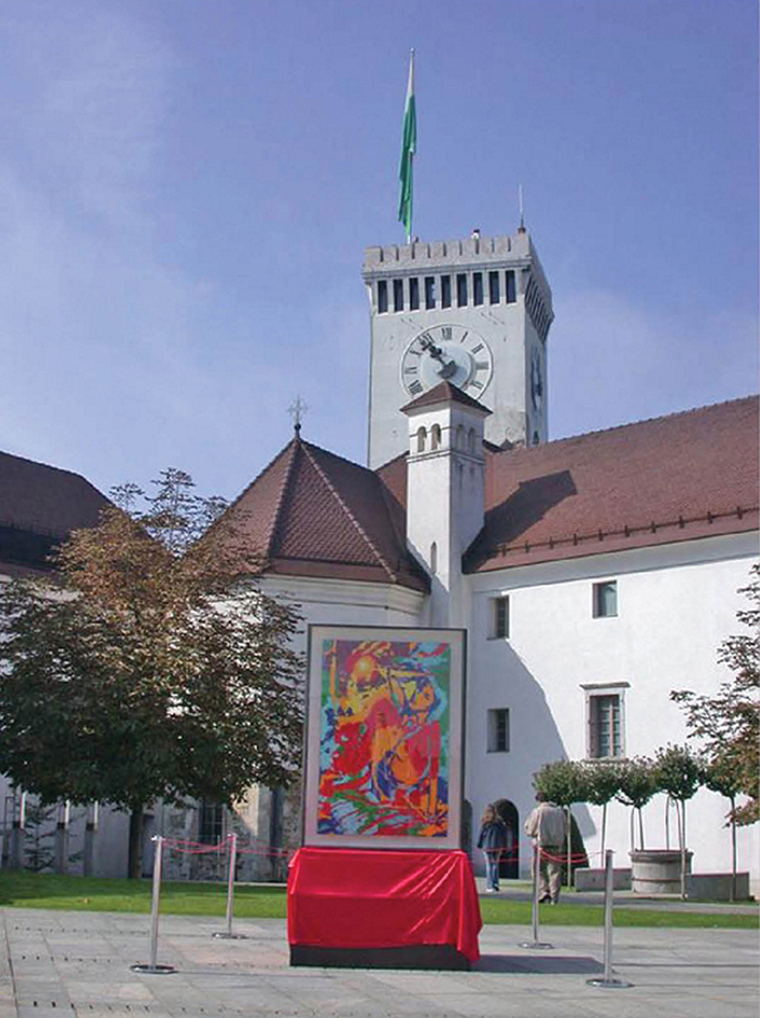 ZOJA, Painting for One Million Euro and 24 Cents

Who will buy a Painting for One Million Euro and 24 cents?

~ By Zoran Srdic, 2007
If we take a statement by Gombrich: ”There really is no such thing as Art. There are only artists.” then the sale and exhibition project One Million Euro and 24 Cent Painting can be described as the establishment of the institution of the artist Catherina Zavodnik and her intrusion into the wider public sphere. The exhibited painting ZOJA-With your Perfume Impregnated, Half in Dream, created from the artist’s personal love experiences made in the technique of oil on canvas. It combines the elements of an urban collage of torn posters and graffiti, which, mixed together, create a new palimpsest image. The author strongly highlights the relations between levels with colour, which gives the painting a poetic character. The painting itself displays thick layers of paint with which the author wishes to draw attention to the difference between the material original and its reproductions which will be available as backgrounds for mobile phone screens in the project One Million Euro and 24 Cent Painting.

For the project One Million Euro and 24 Cent Painting we can say that it is of a conceptual nature, which exposes promotion as the fundamental artistic strategy. It is incorporated among the projects on large billboards which promote art and culture, take over the mechanisms of advertising, and bombard the passers-by with their “ART” message. Since every individual cannot resist the visual messages of advertisements and through them the products of everyday life, similarly in these instances one cannot prevent the art to affect a person in spite of their solid conviction that they don’t want anything to do with it.

The question of the amount of one million euros and a few cents in the project’s title is one of its key features. Thus it does not question the value systems within the artistic world or even the promotion of the art itself – as a way of informing the public about art and, indirectly, the wider world of art and art market with the hope of the artist’s financial success and launch of her career. This amount is actually not problematic at all, for the prices of artworks depend on the circumstances by they are formed: national reasons for purchase would be if, for example, the Austrians would sell us for such an amount the Princes’s Stone, which I am certain we would immediately buy. The economic reason would be the increase of the value of the artwork through a certain time period, where the difference between purchase and sale prices would represent profit. Hypothetically, the economic reason for purchase could also be if the state would be nationally minded enough about its national culture, and the difference in value would represent higher tax write-offs, if its author would decide to donate the work to a certain national or regional institution.

The fact that a young artist, fairly unknown in the art world, is selling her painting ZOJA- With your Perfume Impregnated, Half in Dream for a million and a bit does not guarantee the value of this painting will increase in the following years, and also does not have any basis in reality. The author wants the spectators, when looking at an “unknown work” and accompanied by a question if the participants in the project are even serious, to also set a question of how the value of personal and social values is assigned. The modern society, where every thing has its price, also includes human lives and, what is even more questionable, the human emotion into its value systems. The title of the painting therefore makes us question how we can set the material value to our values, for example, what is the proper insurance amount for death of a person, what kind of a financial award to give a child for his or her good work in school, how much is an injury of a worker or a patient worth, for how much one can offend a person or slander his or her good name …

1There is not such thing as art there are just artists.
2CatherinaZavodnik has a a Master’s in graphic art and Bachelor’s degree in design and is currently finishing her second Master’s degree in painting at the Academy of Fine Arts and Design in Ljubljana. She has already presented her work in Slovenia and abroad in various group and independent exhibitions, and she also published an extensive graphic collection titled Hommage à Gian Lorenzo Bernini (in 2007).

There are people who think that it is hard to set value of art, that art is timeless, ethereal, and full of inspiration somewhere in the sterile landscape of aesthetic measures. And since it is not possible to estimate its value, then it is supposed to be for free. An artist is an exception in the world where everyone charges everything. Especially Slovenian artists. They should be happy to save enough money for canvas and colours. And to charge for their work seems almost like a scandal. Art has no price, especially if instead of a painting of a young Slovenian artist we decide to hang up on the wall a reproduction we have bought in supermarket just for a few coins. And we saved some money… So, what have we lost?

At the same time we are witnessing a wild fetishisation of art, which is becoming more and more intended only for “consecrated”. We are not even allowed to touch it. For the rest of us there is turbo-folk, societies for country women and girls, and sponsored exhibitions in front of the ticket office. That’s it. That is what we are allowed to consummate and slowly languish. Art critics are right to be indignant at Slovenian art market: we have artists that could be compared to anybody just anywhere in the world, but we have nobody to pave their way. Slovenian collectors appreciate only “the names”, while despites their enthusiasm numerous small private galleries can not perform their role.

But, what could be done? How could works of art from young artists get their value? We have decided for a brave, but somewhat risky move. We decided to set the price ourselves. Overbearing behaviour? Maybe, but do we have any other possibility to drawl public attention to underestimation of artistic works? We are selling the painting ZOJA – With Your Perfume impregnated, half in Dream of Catherina Zavodnik for no less than € 1,000,000.24. We are aware of the fact that the price is “unreal”, utopian and exaggerated. But we are sure of one thing: there is a slight, but realistic chance for the painting to be sold. Due to a simple fact that the amount someone is prepared to pay for a “piece of art” depends on how much it means to him/her.

Since it is hard to believe that anybody would actually buy the painting, we will provide that visitors will have the possibility to pay negligible amounts for reproduction of the painting or for purchasing the image for background of their cell phone. And this is what matters. We would like to draw attention of the public to the mysterious relations between expensive – cheap, original – copy and to persuade people to ask themselves what is the »realistic« value of the painting. Has art its value on the market or is it just a hobby of a handful of enthusiastic collectors? However we won’t be stopping there. We plan to exhibit the painting in bigger cities around Slovenia in the following two years.

The second exhibition was in Galeria Severia in Koper. Maybe it will sound too ambitious, but we will try to launch the painting as the most recognisable Slovenian work of art outside the narrow circle of artistic profession. The purpose is simple. Would such painting be worth more or less? Would it get better or worse artistic critics? Answers won’t be simple, but interesting. And at the same time this is the way to promote young Slovenian authors and art itself. And this is the key objective of our project.